Walk in STD Testing Near you!

Our Full STD Panel screens for all 10 STDs. This panel is recommended by doctors after unprotected sex.  This Comprehensive test ensures your peace of MIND.

Get Full 10 STD Tests Panel With 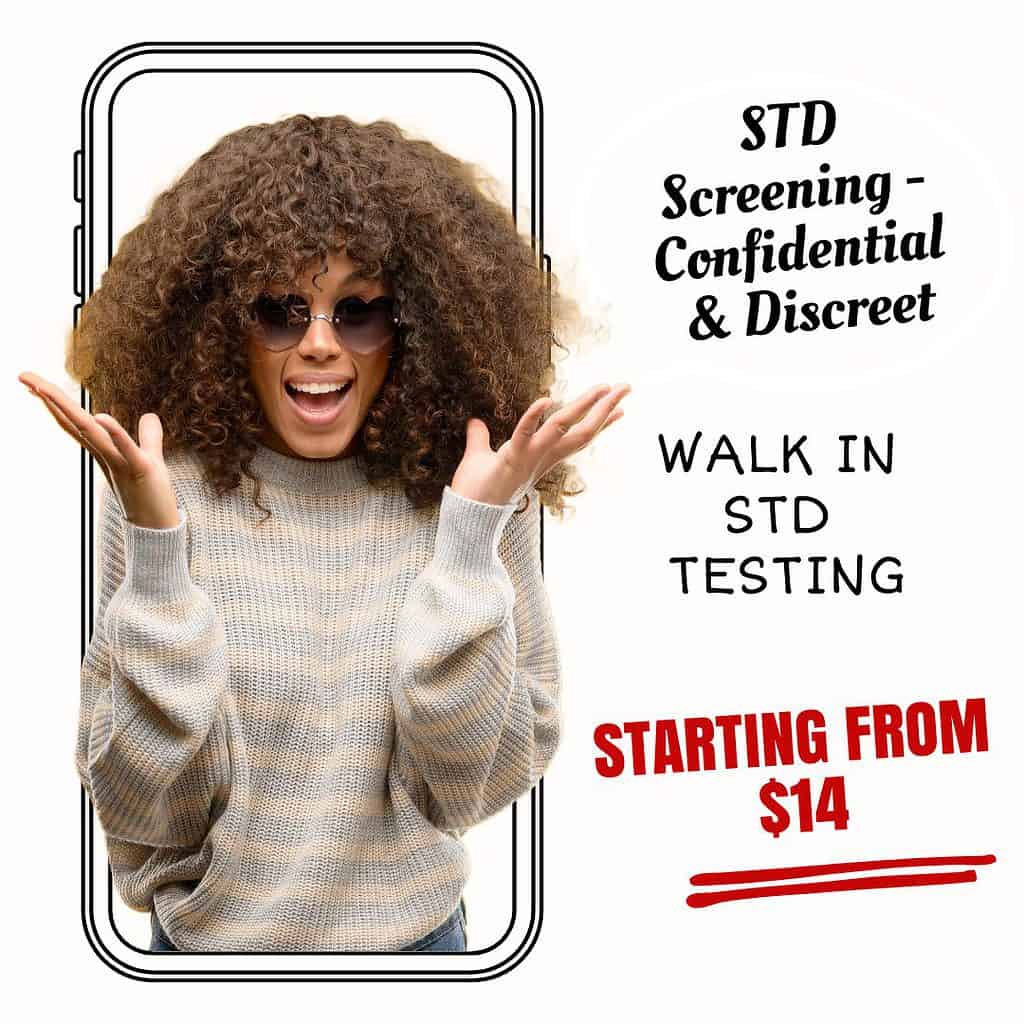 We use the FDA-approved Nucleic Acid Amplification (NAA) test, which is considered the industry's "gold standard." It looks for Chlamydia trachomatis (the bacterium that causes chlamydia infections) as well as Neisseria gonorrhoeae (the bacteria that causes gonorrhea infections). This chlamydia and gonorrhea test is the most accurate available today, and it only requires a small urine sample, so no uncomfortable swabbing or undressing is required.

The accuracy rates of all laboratory tests, including STD tests, are measured in terms of sensitivity and specificity. Our chlamydia and gonorrhea test panel has a 99.8% sensitivity rate and a 99.3% specificity rate.

What are Chlamydia and Gonorrhea?

Chlamydia and Gonorrhea are bacteria-caused sexually transmitted diseases (STDs). The Chlamydia trachomatis bacterium causes Chlamydia; it is a common STD in the United States, with over 3 million new infections contracted each year. The bacterium Neisseria gonorrhoeae causes gonorrhea and thrives in the moist areas of the reproductive tract, including the cervix, uterus, and Fallopian tubes in women, and the urethra in both men and women. Gonorrhea can also develop in the mouth, throat, anus, or eyes.

The Centers for Disease Control and Prevention (CDC) reports that over 700,000 gonorrhea infections occur in the United States each year. Both infections are frequently referred to as “silent” or “asymptomatic,” which means they do not always cause symptoms. The only way to know for certain if you have either of these sexually transmitted infections is to take an STD test. Chlamydia and gonorrhea are both treatable with antibiotics.

How are Chlamydia and Gonorrhea tested?

The FDA-cleared Nucleic Acid Amplification (NAA) test, the medical gold standard in chlamydia and gonorrhea testing, is available at our lab. In a small urine sample, our NAA test looks for traces of the infection.

How are Chlamydia and Gonorrhea spread?

Chlamydia and gonorrhea infections, which are transmitted through oral, vaginal, and anal sex, can affect both men and women. Both infections are possible whether or not ejaculation occurs. If you have sex with an infected partner or if the bacteria was not completely cleared from your system before having sex again, you may become re-infected with chlamydia or gonorrhea after being treated for these STDs. While the infections do not always cause symptoms, the most common ones are burning during urination, abnormal discharge, and/or unusual sores or rashes in the genital area. All sexually active women under the age of 25 should be tested for gonorrhea and chlamydia, according to the CDC.

Who needs to be tested for Chlamydia and Gonorrhea?

Gonorrhea and chlamydia are common sexually transmitted diseases that can infect both men and women. If you engage in sexual activity, you should get tested for both diseases on a regular basis. Having multiple sexual partners is an especially dangerous behavior. Because both of these infections are asymptomatic, it is possible to contract and spread them unknowingly. The only sure way to know if you are positive is to get tested.

Why do I have to test for Chlamydia and Gonorrhea at the same time?

Chlamydia and gonorrhea are known as co-existing infections because people are frequently infected with both at the same time, which is why testing for both STDs is important. Both diseases are caused by bacteria and are diagnosed through the use of small urine samples. Untreated chlamydia and gonorrhea infections, though relatively easy to treat and cure with antibiotics, can cause serious damage, including pelvic inflammatory disease (PID) in women, which can lead to infertility and ectopic pregnancy, and epididymitis, a painful condition in the tubes attached to the testicles in men.

How soon after exposure can I be tested for Chlamydia and Gonorrhea?

What should I do to prepare for the Chlamydia and Gonorrhea test?

You should not urinate for at least one hour before arriving at our testing center in order to provide an accurate sample. There is no need for any additional preparation or fasting.

When is the Best Time to Test for Chlamydia and Gonorrhea?

What happens if your Chlamydia and Gonorrhea tests positive?

Order the test on Thursday, go to the lab 8 minutes from my house on Friday morning around 6:30am. Got my result back by Monday around 10:00 am in the morning. Great service, convenient and fast result. Thanks STDcheck.com and Quest Diagnostics.

It took a second to get checked in at the kiosk and admitted into the testing room, but testing was quick and easy and staff was friendly.

I can not believe how incredibly easy this process was! I did the 10 panel STD test. Ordered the test at 6pm on Wed night, tested Thurs morning at 7:30 and my results were coming in on Friday at 9am. The final results came by 8 pm Friday night! I’m so relieved i took the test and will use this service again!

Getting tested was easier than it’s ever been. As someone that used to get in line at a planned parenthood for my yearly screenings I was expecting a wait at the lab. Instead I just walked in, was called within 3 minutes of signing in, pee’d in a cup, they called my name to give blood before I was done peeing, gave blood, and was out the door. ALL WITHIN 20 MINUTES. My results were then ready about 4 hours less than the 48 hours they promise. All in all this is a FANTASTIC service! The final results came by 8 pm Friday night! I’m so relieved i took the test and will use this service again!